HIMYM: So, are Robin and Barney Actually Getting Married?

As you can see by my recent 'How I Met Your Mother' recap, I was less than pleased with the eighth season's premiere episode. I was annoyed because I'm a huge Robin/Barney supporter, and I felt like Thomas and Bays were once again trying to be all intellectually tricky with us.

Do Robin and Barney get married? How can that happen if they both have cold feet? Is Ted really insinuating (to that old lady at the Farhampton train station) that the wedding didn't happen at all?

I know, I know, Bays and Thomas are probably thrilled that I'm asking those questions. They delight in creating new storylines that branch off of old storylines. But frankly, I'm tired of all the branches. I want some closure, somehow.

Preferably the assurance that Robin and Barney will (or won't) get married and will (or won't) stay married. Because honestly, I couldn't care less about that other branchy storyline where Ted meets the mother.


Here's what the show's creators have admitted in interviews:

Robin and Barney will get married. How that will happen, whether it will happen at that wedding, and whether one of them will freak out immediately after the ceremony and run away? Who knows.

In other words, what we know right now is next to nothing. Just because a wedding ceremony happens doesn't mean that Robin and Barney will stay married for long. Those cold feet (on both sides!) certainly don't bode well. Though it is also possible that they decide to run off together and elope. Secretly I'm hoping for the elopement. I mean, if I don't have the option of seeing a wedding ceremony at least they'd get married and want to be married.

Michael Arbeiter suggested that Robin and Barney can't have a happy future because we know for sure that Robin can't have kids (and never has them) and that Barney was briefly enamored with the idea of being a father. I'd argue that despite the one episode where Barney is all about babies, his excitement about Robin's potential pregnancy was really more about how enamored he was with her than how enamored he was with the idea of impending fatherhood.

As Thomas recently said in an interview, "the chemistry between Neil [Barney] and Cobie [Robin] is so great that she doesn't even need to be in the scene with him for them to have chemistry". How could they possibly turn their back on that? 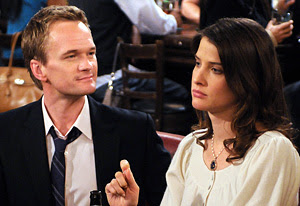 Email ThisBlogThis!Share to TwitterShare to FacebookShare to Pinterest
Labels: 2012, cobie smulders, how i met your mother, mondays, neil patrick harris, questioning the american television viewers, review, season 8, spoilers, wedding, will they or won't they?